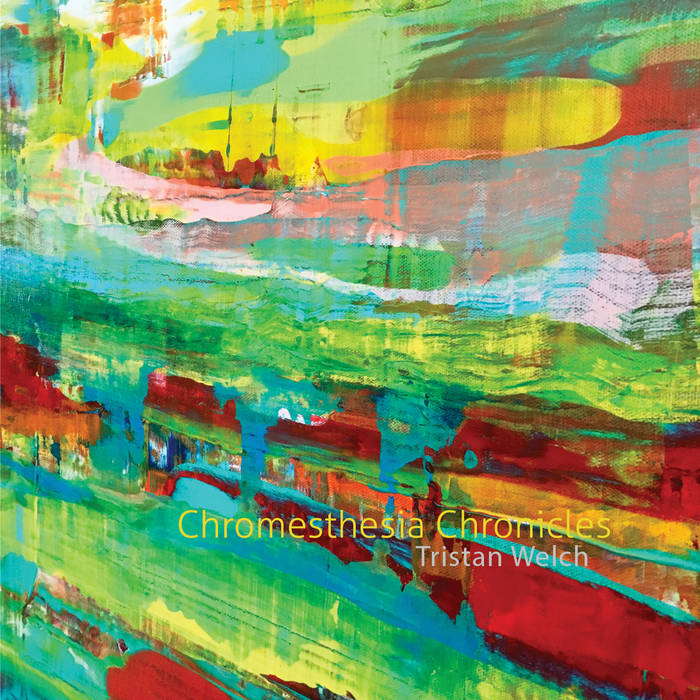 Music Won't Save You

In early 2019 I was fortunate to have found out about DC musician, Tristan Welch, and his atmospheric, ambient style of guitar playing. At the time, I was working on a series of abstract paintings that were influenced by instrumental and electronic music of a more experimental nature, and felt a strong connection to the richly layered sounds from Welch’s 40 Hours album, as well as his live performances. The tones, textures and variety of moods conveyed from these sounds prompted me to get in touch with Tristan to see if a creative collaboration between the two of us could happen. Thankfully he was up for the project, and over the course of several months we put together nine songs and images, resulting from an experiment inspired by a form of synesthesia called chromesthesia – a rare ability to “see music” in shapes, lines and colors, hence the title “Chromesthesia Chronicles”. About half of the tracks were made as a response to images of recently completed paintings sent to Tristan, while the other half were tracks that Tristan sent to me to interpret visually, as paintings. A deeply immersive audio journey encompassing a wide range of moods and emotions, this collection of nine musical compositions from Tristan Welch is by no means your run-of-the mill ambient music, expressing what it is to be human while transcending words and lyrical content. Brian Eno stated that ambient music required the listener to meet up with the music halfway, if the listener is to get anything out of it. That said, take some time out to get to know the music on Chromesthesia Chronicles, for a truly rewarding listening experience.

Statement on the music:

When Steve approached me with this idea I was very excited. One of my earliest influences on guitar taught me to view every note I play as a stroke of a brush. To think more in color than in sound. This person played more rock 'n' roll music but was extremely talented and thoughtful - I took this suggestion somewhat literal. This project gave me a chance to explore that even more so. I didn't want to focus to much on composition I wanted these to be based on feeling and mood. Majority of these ideas are single takes.

At some point during Steve and I's friendship he shared with me that he is majority deaf in one ear. I didn't think much of it till I started recording and decided that this release should be in mono - to accurately reflect our relationship between color and sound. Each CD comes with a mono sticker on it to make this point clear.


Steve Loya is a true believer in the power of art and creativity and makes every effort to explore this in his own life. A Bachelor of Science in Art Education major from Edinboro University of PA, Steve's work is motivated by a strong desire to communicate and express visually something beyond words or spoken language, however serious or playful his approach and subject matter may be. His work has been exhibited in solo exhibits, juried and group shows, galleries and small businesses throughout the Northern Virginia region, DC, NV, PA, MD, NY as well as in Japan, Greece,and the UK. His work has also been featured and published in a handful of physical and online artist publications and books during the past decade. You can see more at his website at

Tristan Welch is a musician & artist based in the Washington D.C. metropolitan area. His focus is creating soundscapes via electric guitar, treated with electronics. A self-professed fascination with minimalism and repetition is evident in his work- a hypnotic layering of melodics that evolve and dissipate while maintaining a steady tone center. ... more

Bandcamp Daily  your guide to the world of Bandcamp

Featuring appearances from Kari Faux, Bluestaeb and and interview with NY-bred artist Wiki